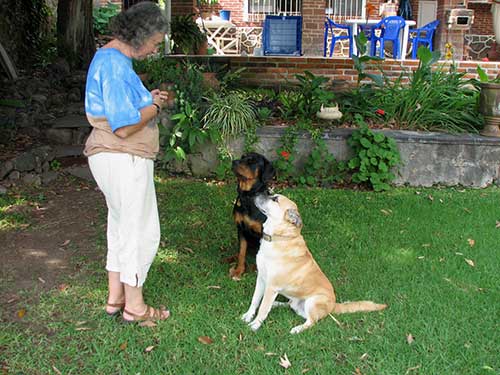 Our older dog, LarryDog, has been a bit jealous of all the attention that Lola’s been getting.

So spontaneously this afternoon, I did some clicker training for both of them together. (“Spontaneously” means that I actually had something else entirely planned for training, but this idea popped up!)

Larry’s known the sit-stay for many years, of course. His favorite behavior when he wants to please me is to sit. I like this so much that I will encourage it in Lola too. She has been getting better at the sit in the several days we’ve had her. In this photo, Lola was getting more and more steady in the “stay” part, picking it up from Larry.

I could practically see the wheels turning in her mind:

“Ah, so this is what we do. We sit till Rosana gets her act together.” 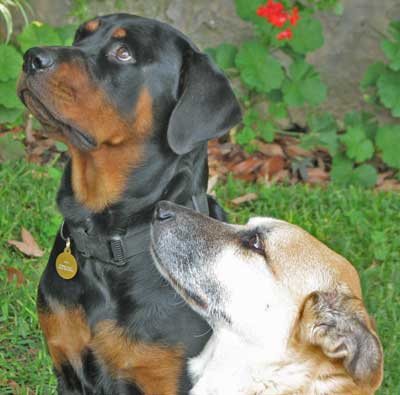 The treats were tiny bits of cut-up cheddar cheese, well worth waiting for! After they had stayed a while, I clicked the clicker, then moved bits of cheese from one hand into both hands and spread them out, palms flat, a good ways away from each other so each dog could tell where to go for the reward.

Here are the two of them together. Such smart and good-looking doggies! That’s my group word, by the way.

When I want both of them, I say “Doggies!”

Please note that I may make a commission on things you buy through this site. More info here.